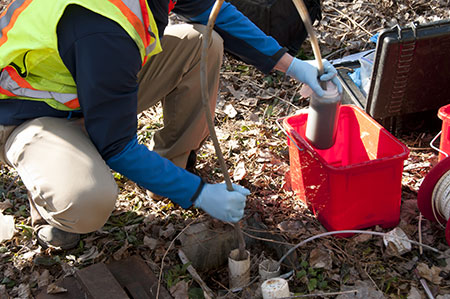 To ensure the soil on your property or development site is free of the substance, or has a safely low level of it, asbestos testing in El Dorado County, CA is becoming critical. Sonde Geological Services is helping homeowners, developers and site managers find peace of mind by providing this service.

The Risk of Asbestos

In the ground, asbestos remains innocuous. It’s only after particles are whipped up into the air that they become a problem—we breathe them in, where many years from now they could potentially become a cancer-causing agent in our lungs. If dirt or soil with large quantities of asbestos is disturbed, you could be putting yourself and anyone with you at risk.

Having an asbestos testing service in El Dorado County, CA come out to test your soil before it’s disturbed or turned can be a proactive first step in protecting yourself.

Where is Asbestos a Problem?

The most common areas continuing asbestos are areas that have been previously developed. Generally, asbestos contamination occurs in two forms: bonded asbestos and loose asbestos. Bonded asbestos has been mixed with concrete and other bonding agents, meaning it’s suspended and generally less harmful. Conversely, loose asbestos is dangerous because it easily falls onto soil and mixes in.

Some areas where soil testing for asbestos is generally a smart idea include undeveloped crawl spaces under porches or homes, in utility pits and areas rich in topsoil that previously housed a development.

Soil testing for asbestos can be done by a trained asbestos testing service in El Dorado County, CA. If low-to-no concentration of the material is found, you can develop with peace of mind. If dangerous levels of asbestos are found, a professional can advise you on the proper course of action, which likely includes remediation.